My Computer History and why the change!

I go back a few years with computers starting with the DOS operation system and was a Beta tester for Windows NT, now just Windows. My first photo editing software was Windows version of Capture One so my backup data was on USB drives with Sessions and some Catalogs. I decided to have a fresh look into the Mac in 2015 just to see if I could simplify life from the Windows marketing and other forced improvements they claim like security updates that are forced without notification!

For years I just didn’t care for the way Mac forced their chip and operating system that forced you to totally go Mac and not look back. Mac OS is basically a Unix operating system with a Mac interface and knowing that Unix is a very stable OS was very encouraging. The chip set is the same on Mac and PC based so that was encouraging but really doesn’t matter so much other than the cost is lower.

The firs big setback was the file system on the backup USB drives is different than Windows NTFS so the challenge was to make sure I could still get to my legacy data with the Mac. (More to follow on that.)

Next was comparing the cost so I had a look at updating my hp Z Book with compartmental memory and screen resolution and found the price to be about the same. The big selling points were the size, weight and viewing quality. Both computers seem to operate about the same and the chip set were the same. The big difference was the weight was less on the Mac Bool Pro 15 so much less along with the size of the charging brick so I have less to pack. The difference in the display quality was the major factor since you just can’t debate the Retina quality. So I bought the Mac and haven’t looked back. BTW the guarantee was 2 years and not 90 days and I got a free copy of Pages, Numbers and Keynote and would have to buy the Office products.

The big concern was moving form a spinning hard drive to an SSD. Again Mac makes backups so easy with Time Machine that I just don’t worry. I have use it once in 4 years and recovery was very simple. Either way SSD or spinner you need to backup! I use Time Machine to backup everything except Photos. For my Photos I use Backup Guru. More later!

Making the change took a little research and I will explain why I did what I did best I can but at the end of the day there may be a better way or better products to use in the background. The determining factory in “Why” were cost and reliability.

Since my existing photo backup was done on a Windows machine then the file system was NTFS. Mac used a different file storage system so I had a look at a converter. What I chose was NTFS for Mac OSx LT. As I recall it was about 30 dollars and it was a one time fee. Simple to install and noting to use. When you plugin an NTFS USB drive it goes to work, No interaction is needed so it stores everything in NTFS format or reads and converts to Mac from backup. I frequently edit photo Sessions directly from the USB drive and no noticeable lag.

As I mentioned earlier I use Time Machine to backup everything other than Photos. I do all my photo work in a root directory called PhotoMaster. With Time Machine you can exclude folders so I exclude PhotoMaster.

For the photos I use Backup Guru for the simple reason it was in expensive and doesn’t encrypt the files in some unknown way. It just copies files and looks at the time date stamp. Anything newer overnights what is there. In the past with Windows different products did who knows what so I wanted a very simple system that I could hack if needed. In the past I wrote a simple backup batch file using Robo Copy on Windows since I didn’t like or trust backup software. Backup Guru is very simple just a source and destination selection and go for it. I chose the lite version and get a notice once a year there is an upgrade but haven’t bothered. As I recall I paid a onetime cost of 30 dollars.

I can truly say I don’t miss Windows! The Mac OS has been stable and in the past four years I have not had a problem.  The display is worth the change if nothing more. What I see is what I get from screen to printer. On Windows I purchased a good ??? monitor that was calibrated with a Color Monkey along with the printer, a step that I no longer seem to need. On Windows I had a workflow using Capture Pilot to verify and my iPad to verify the photo the image before printing. I just use the Mac!

The Mac OS allows simple Scripting that Capture One has opened for use. Now I worked for a software company for more that 23 years but not as a programmer but know enough to hack. I wrote a script to fill in data fields in the Meta Data like my name, address, web page and so on. the most useful is the Original File name. Now all of these can be filled in with Presets except the Original File name. In Presets this is not a dynamic field that I have found but with Scripting it is. In other words the field in Presets needs to be changed manually for each photo. With the script is automatically changes per Image. Nice!  Before I process a photo I fill in the Headline filed and Description in the metadata and use the Headline Token to name the photo. My Web page reads these two files and saves me time duplicating the same data twice. Since the file name is different than the RAW file name then I have a link back to the RAW file and it’s neighbors, by storing the Original file name. I use a web based software to get the metadata called Metapicz  http://metapicz.com/#landing. You can always call the Jpeg in CO.

As you can see I have a complete that is compatible with both Mac and Windows for my file storage so if I want or need to work with Windows I can without a problem. True Windows dominates the market with a small investment of 30 dollars four years ago I am covered!

People say there are more apps for Windows than Mac but for photo editing if it isn’t for the Mac the I don’t need it! As far as Office products when I bought the Mac it had the Mac version  came with everything. Easier to use and can export and import to Office Products.

Do I miss Windows, Not One Bit or Byte! 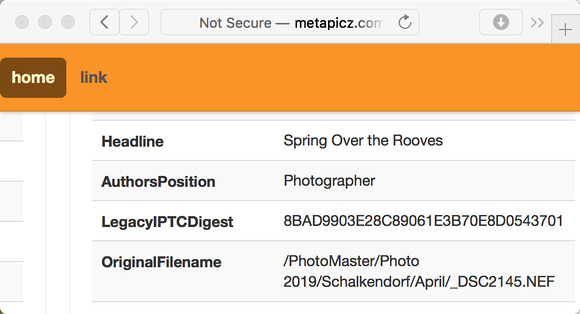