Image Compression and Capture One

There has been some discussion about storage  of image files and different options for file storage, There are two concerns, number of files for upload and space required. There have been some comments about using a compression utility and EIP, from Capture One, to solve the two concerns. So I decided to do a little homework and testing!

The next was packaging to EIP in Capture One. My conclusion is EIP does no compression. They don't state this in the documentation but still I had to test. Basically EIP combines the RAW file and the .cos or Settings file in a single package to be shared with other's. That is the sole reason for EIP as I see it. Not a bad concept but it is not intended to solve the above issues.  The foot print on the disk is still the same if you modify or open an EIP file on your machine or others open the file. As I stated the EIP file stores two tile, RAW and .cos files from a Session. When you edit an EIP file Capture One creates the Cache files that include the Proxy files and Thumbnail files so the basic foot print on the disk is like the original! No space savings. I should mention EIP files can be directly edited without extracting the RAW file. To get to the RAW file you do an Unpack. Unpacked or Packed you can modify the image. Not bad!

One thing that I found out as we'll when you Unpack an EIP file the RAW image file is restored and the .cos file is restored. Good, you have the original and settings as expected. But there are other files related to the .EIP file that were created with a pre extension .eip (RAW Name) .eip.cot for example are left on the hard drive. The ,EIP file is gone but the supporting files are still on the hard drive. (Would be nice to see Capture One do a little cleanup! The files are small but what good are they if the .EIP file they support is gone.)

Backingup to the cloud or any remote location that requires the internet transfers differently than a local hard drive. Small files generally go faster than large file. When you transfer a large file it is broken up into packets. When you upload a packet is sent and confirmed I think by the size then a second packet is sent confirmed and assembled with the first part and so on until you get to the end of the file. Not sure on the packet size but I have experienced this in the past where I had zipped several large files that were compressed. When it was taking hours the person on the receiving side asked if I could just send a few files not zipped. To make a long story short the folder of 100 files was there before the zip file was finished! Now this was about three years ago but I believe this still to be true. So I am hesitant to suggest zipping Capture One Sessions just for the sake of transfers.

You can review the results of the test below. I might add this is based on Nikon RAW image data so there may be differences with Canon or others but I believe they will be about the same. Maybe someone can test this on other file formats and add a comment to the blog. Also EIP files are limited to Sessions according to the Users Guide but not sure since I use Sessions. Maybe someone can confirm if there is a workflow with Catalogs. 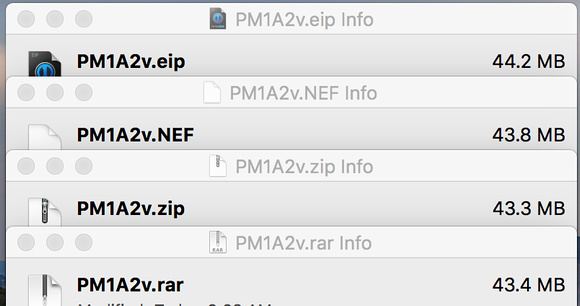